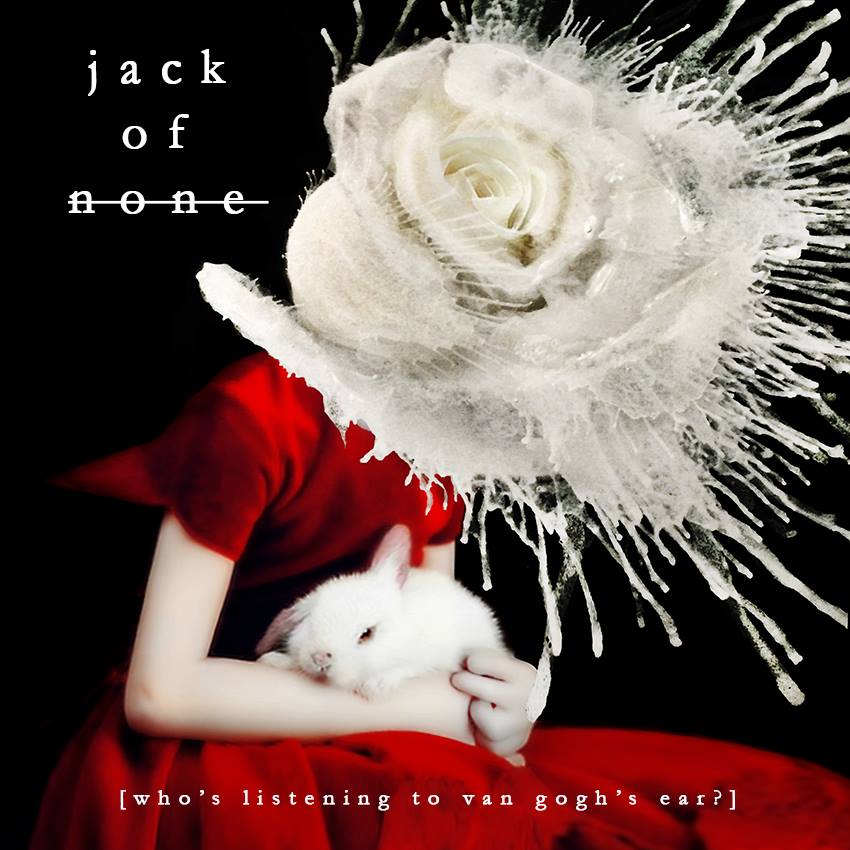 It’s quiet in my dimly-lit living room. I thumb through the album’s CD insert – going over the track list and lyrics in the hope of getting an idea of what to expect. The cover art immediately grabbed my attention earlier in the day – the striking image of a girl in a red dress caressing a white hare – her head splattered into the image of a white rose.

“Jack of None… A clever name…” I thought.
“Who’s Listening to Van Gogh’s Ear… A clever title…”
“Do severed ears of long-dead painters make sounds?” I wondered.

A track called Hotel Carcass opens the album. It’s a jazzy number with a prominent bass-line carrying the rhythm section. An organ plays a catchy tune as Maxine Syjuco narrates in the first person. It tells the seemingly mundane story of a woman checking into a hotel. Her voice sounds as if she’s speaking through a telephone. Her delivery seems intentionally lifeless.

Each verse ends the monotony with bursts of dissonant noise from electric guitars, which smoothly transition into a piano and horn section playing over the sound of murmuring – like the listener is standing in the middle of a five-star hotel lobby. The track reaches its crescendo as the woman in the story makes a startling confession amidst a sea of organized chaos in the instrumentation.

We’re past the climax. For a brief moment, it’s quiet again.

We cut to the second track, which opens with the ominous sound of crying in the distance and a woman moaning the words “Pater, Ignosce Mihi” (latin for “Forgive me, Father”). It’s a stark contrast to the first track with its fast tempo, driving bass, heavy guitar riffs and distorted samples. I’m reminded of industrial rock bands like “My Life in the Thrill Kill Kult” and “Machines of Loving Grace”. I am really digging it.

There are 2 smoldering guitar solos sandwiched between verses. They’re comprised of bluesy licks strung together in traditional call-and-response fashion. They seem out of place thematically, but work brilliantly to add a human element to the music. It’s that sort of struggle between man and machine that made me fall in love with the industrial rock genre, and track number 2 of this record seems to have it in spades.

Again, it’s a very dark track. But unlike the first, this one is less contemplative and leaves me wanting to jump out of my seat and break something — like the face of Jared Leto’s bleach blonde character in Fight Club – to be able to look up from the bloody stump at my feet, unclench my bruised fists and remark “I
just wanted to destroy something beautiful”

Track number 3 is called “Mrs Stitcher”. There’s more industrial rock goodness here. But the spoken
word vocals keep it sounding fresh. It tells a story that reminds me of Neil Gaiman’s “Coraline”. It’s an
unsettling tale, but told in almost comical fashion, and ludicrous enough that it never sounds like Jack of
None is a death metal band out to gross me out or scare me. Instead, like the tracks before it, “Mrs.
Stitcher” comes across as tasteful, and… artsy?

Artsy… Maxine Syjuco alternates between clean narrated lines and vocal pitch shifters when she speaks
as the track’s deranged titular character. The words are recited over a 4/4 beat, brutal down-tuned
guitar riffs and a disharmonic array of sampled noises.

The record goes on. Each of the 12 tracks in its 45 minute play time is built around a new concept and
refreshingly bold ideas.

“(But) Noise” for instance, has Maxine reciting over a haunting piano and string section before exploding
into a mad, mortal orgasm of sound – a deafening guitar solo, jarring feedback and the thunderous
pounding of drums.

With the exception of the very radio-friendly blues-rock tune “There was a Crooked Man”, the somber
“Confessions of a Chop Chop Lady” is musically the track with the most commercial appeal. But there’s a
twist of irony here. It’s also the most demented – with lyrics that tell the gruesome tale of the victim of
some murderous, cannibalistic serial killer.

“The Witherling” is reminiscent to me of early Nine Inch Nails (think “Wish”), and is easily my favorite
track. It keeps a frantic pace, and features heavy riffage, a vocoder, and some manic scat in its refrain.
An odd assortment of things, but this band knows how to make it work.

Musicianship is on full display in the instrumental “Nocturnes in Dorian” (credit to A.G. Syjuco, who is
the composer). It takes the listener on a surreal journey through lush soundscapes before ending the
record with the final track – an eerie piece called “Poem for the Invisible”.

The record ends. It’s quiet again in my dimly-lit living room. I take a few minutes to collect my thoughts.

“Who’s Listening to Van Gogh’s Ear” is an incredible achievement by a group I’ve never heard of before
– a work of art expressed through sound and poetry. Each track opens a new door that gives the listener
something new to experience – like strolling through the MoMA and taking time to fully appreciate each
of the timeless pieces on display. Here, each track is a phenomenological exploration of a different facet
of the human condition – without ever being stifled by tired, made-up concepts like “musical genre”.
Wow… I got to use the word “phenomenological” in a written review! My philosophy professor would
be proud!

It’s a heavy album for sure, and may not appeal to your casual listener. I love that most about it!

This album is heavy in sound — heavy in its themes – and best of all, heavy in substance. It’s also best
“experienced” as a whole – with all 12 tracks playing in sequence – like many of the great concept
albums of yesteryear. That makes it an odd fit in the music scene of today, which is dominated by 99-
cent track purchases and subscription-based streaming services.

If you’re looking for something to groove to while you work, or something to get your heart pumping
while you jog, I advise you to try something else. If you’re like me and want to sit down and not just
listen to, but truly experience something new and exciting, then look no further. Jack of None’s “Who’s
Listening to Van Gogh’s Ear” is a must-have.

Sit through it. Let it drench you in your own existential thoughts. Experience it. 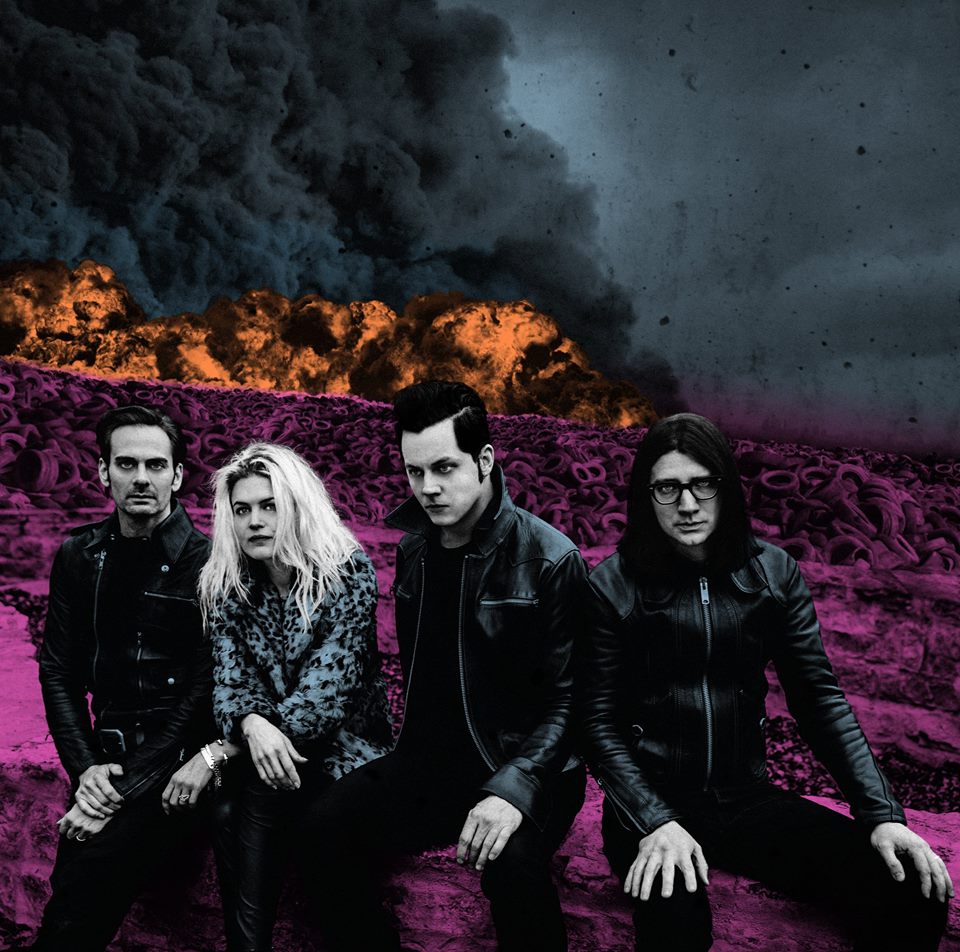 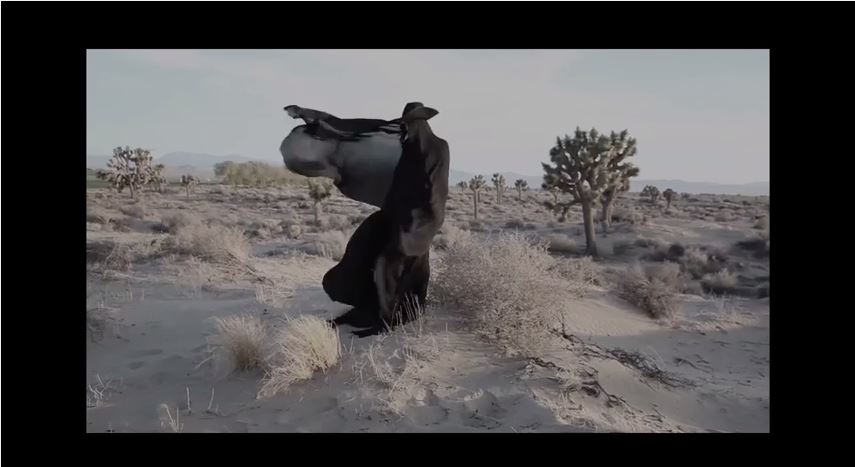 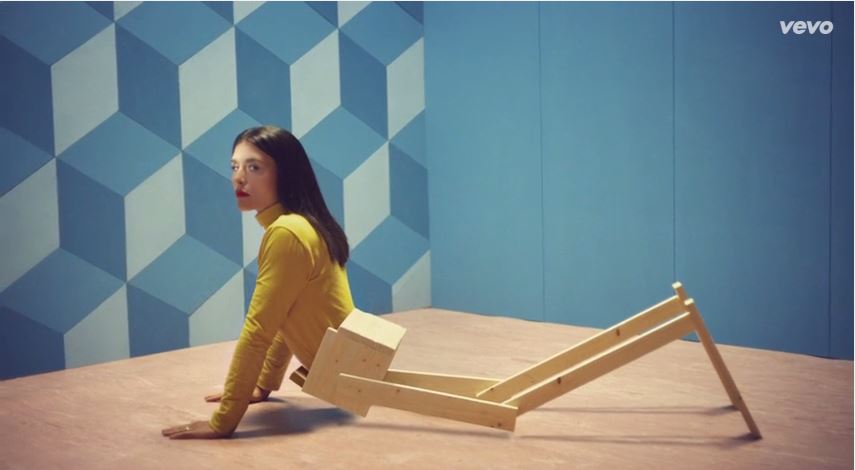 New From Swans - “When Will I Return” Swans are releasing their new album, The Glowing Man, on June 17...